Hate speech has long been pervasive in Pakistani society, especially directed towards individuals and groups belonging to minority faiths (and those of no faith). Those not following the majority’s Sunni faith, are given different titles and labels while several stereotypes are associated with different faiths, sects and religions, including Christians, Hindus, Ahmadis, Sikhs and Shias. However, when it comes to online spaces where more and more people are joining different social media platforms to express their views and share their opinions (or those of others whom they support), these labels, titles and stereotypes get hugely amplified, attracting widespread attention across whole communities. This report offers an account of such expressions to understand the nature of religion-based hate speech in Pakistan’s Twitter and Facebook spheres in 2019/2020.  The report documents Pakistan’s record vis a vis its international human rights commitments, as well as how un-countered hate speech is relevant to the review of Pakistan’s record under the European Union’s framework of Generalised System of Preferences Plus (GSP+). This special trade status is granted by the European Union under certain economic conditions and allows a given country to export its products to European markets at a reduced or zero rate of duty. However, this status comes at the condition that states improve their fulfilment of international human rights and labour rights obligations.

Pakistan is a Muslim majority country, where Islam is constitutionally declared as the State religion[1]. While the majority of the population adheres to Sunni Islam,[2] Muslims also comprise Shias, Ahmadis and Ismailis. Article 260 (3)(b) of the Constitution categorically mentions Christians, Hindus, Sikhs, Buddhists, Parsis, Ahmadis and Bahais as non-Muslim groups and communities in the country. The Ahmadi community, however, associates itself with Islam and has a long resisted being categorized as non-Muslim in the Constitution. In addition to the Constitutional categorization, Section 298-C of the Pakistan Penal Code which regulates blasphemy laws, proposes up to three years of imprisonment for members of the Ahmadiyya community who associate themselves with Islam, stating that:

“…who directly or indirectly poses himself as Muslim, or calls, or refers to, his faith as Islam, or preaches or propagates his faith, or invites others to accept his faith, by words, either spoken or written, or by visible representations, or in any manner whatsoever outrages the religious feelings of Muslims…”.

Similarly, discrimination and faith-based crimes against citizens belonging to other religions – commonly referred to as religious minorities – are prevalent and include hate crimes. Blasphemy laws have blatantly been misused/abused against people of Christian, Hindu, Shia and Ahmadi faith.

Recently, religious expression in Pakistani social media spaces has been increasingly criminalised by the State – dubbed as either hate crime and/or profaning Islam, as interpreted by the Muslim Sunni majority. Two Christian brothers, Qaisar Ayub and Amoon Ayub were sentenced in December 2018 to capital punishment for spreading sacrilegious content online.[3] Earlier, Taimoor Reza, belonging to the Shia faith, was similarly sentenced to death in June 2017 after being convicted by an anti-terrorism court. Reza was accused of spreading hate speech against the Deobandi sect, a Sunni denomination of majority Islam.

Pakistani social media is filled with faith-based hate and/or dangerous messages directed towards Ahmadis, Christians, Hindus, Shias and other faiths. The COVID-19 pandemic further created situations for the religious minorities where they faced backlash and were targeted with hate speech campaigns, such as #Shiavirus.[4]  The following section of the report has taken stock of Pakistani social media, primarily Twitter, to present different shades and trends of dangerous speech in the country.

Although the Pakistani Constitution talks about providing equal rights to all citizens, minority religions, sects and faiths have been facing numerous challenges vis-à-vis the exercise of their constitutional rights and guarantees. During the latest country-specific reviews under the UN Human Rights instruments, particularly the International Covenant on Civil and Political Rights (ICCPR)[5] and the Universal Periodic Review (UPR)[6], the State Party received abundant recommendations to address serious human rights violations against faith-based minorities. These include, but are not limited to, revisiting/decriminalizing blasphemy laws, curricula reforms, equal access to economic, social and cultural rights, etc.

As part of its many global commitments, Pakistan has a legal obligation to adopt and implement international human rights instruments, including treaties on labour and environment. Pakistani is a vulnerable country with regards to its deteriorating financial health. However, it managed to win the European Union’s (EU) Generalised Scheme of Preferences Plus (GSP+) status in December 2013, which came with additional obligations vis-à-vis human and labour rights, environmental protection and good governance, with particular reference to 27 human rights, labour and environmental conventions identified by the European Union. In fact, these instruments are none other than the UN multilateral treaties, which Pakistan is already a state party to.

Other than Pakistan, twelve other countries also enjoy this trade advantage. Once a country has been granted this status, it not only has to implement 27 human and labour rights, environmental protection and good governance treaties, but also has the responsibility to report back to the European Parliament

* The names of the author and research associates are kept anonymous fearing any negative security implications. HBMM

[1] Article 2 of the Constitution of the Islamic Republic of Pakistan.
[2] In this report, we will refer to majority Sunni Muslims when describing incidents of online hate to show that instigators are from the Sunni majority Sunni in Pakistan, but we are by no means implying that all majority Sunnis act or speak in the ways described.
[3] Rehman, D. (2018). Pakistan sentences two Christian brothers to death for online blasphemy. Daily Pakistan, accessible at: https://en.dailypakistan.com.pk/15-Dec-2018/pakistan-sentences-christianbrothers-to-death-for-online-blasphemy
[4] Mirza. J. (2020) Pakistan’s Hazara Shia minority blamed for spread of Covid-19, accessible at: https://www.ids.ac.uk/opinions/pakistans-hazara-shia-minority-blamed-for-spread-of-covid-19/
[5] OHCHR, (2017). Human Rights Committee’s concluding observations on Pakistan’s review under ICCPR, accessible at: www.OHCHR.org
[6] OHCHR, (2017). Universal Periodic Review, 3rd Cycle. Concluding observations on Pakistan’s review under UPR, accessible at: www.OHCHR.org

The research employed social media monitoring to understand violent extremism and the trends in religious debates online. For this purpose, both Twitter and Facebook monitoring was carried out. 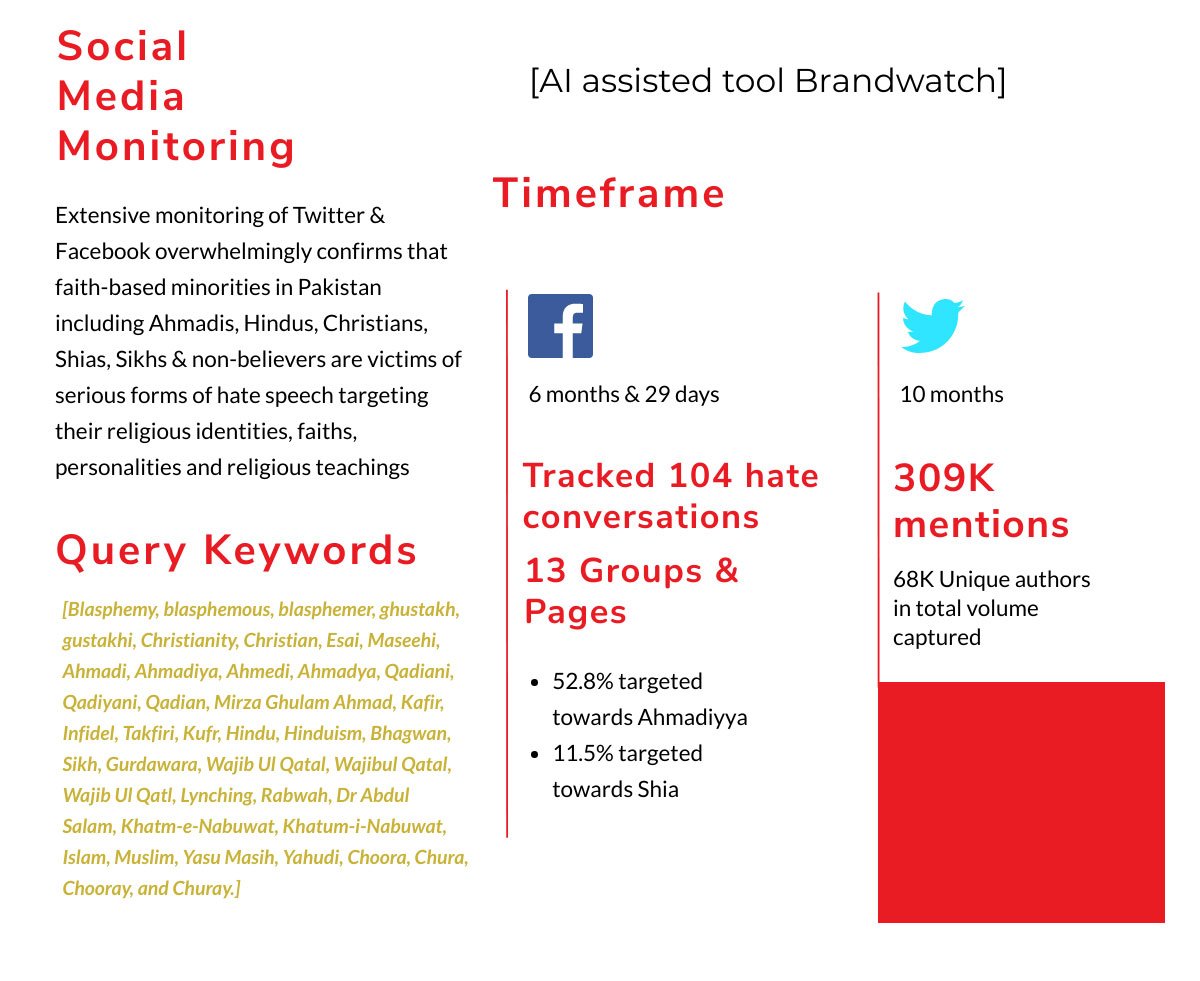 For data collection, Bytes for All relied on the Brandwatch tool facilitated by Minority Rights Group International/CREID.

A significant chunk of the data is labelled as ‘neutral’, which denotes that Twitter users using the keywords during their conversations did not include in their messages negative emotions or expressions targeting minority faiths. The remaining tweets are divided in two categories, Negative and Positive. The majority are labelled as ‘negative’ and include hate content targeting minority faiths attached with negative emotions. A small number of tweets are labelled as ‘positive’; These include arguments pacifying the conflict in conversations by associating positive emotions to the terms.

The team were not able to access Facebook’s data on Brandwatch’s platform and therefore the monitoring of hate speech on Facebook was done by selecting groups that were likely to be involved in conversations about relevant topics with a focus on specific incidents that could result in hate commentary. The posts discussing the events were analysed and the comments and their replies were mined for any inappropriate content. When all the comments were collected, they were categorized under eight categories of religious debates and extremism online which will be discussed below.

For Facebook monitoring, pages of different religious sects including closed groups were joined and monitored daily for a period of 50 days. In addition, some key incidents were also specifically targeted, which would garner religious hate and dangerous messages/comments. The incidents were related to Christian, Hindu, Ahmadiyya, Shia and Ismailia communities. The spread of violence in or affecting religious communities was assessed from posts across Pakistan. 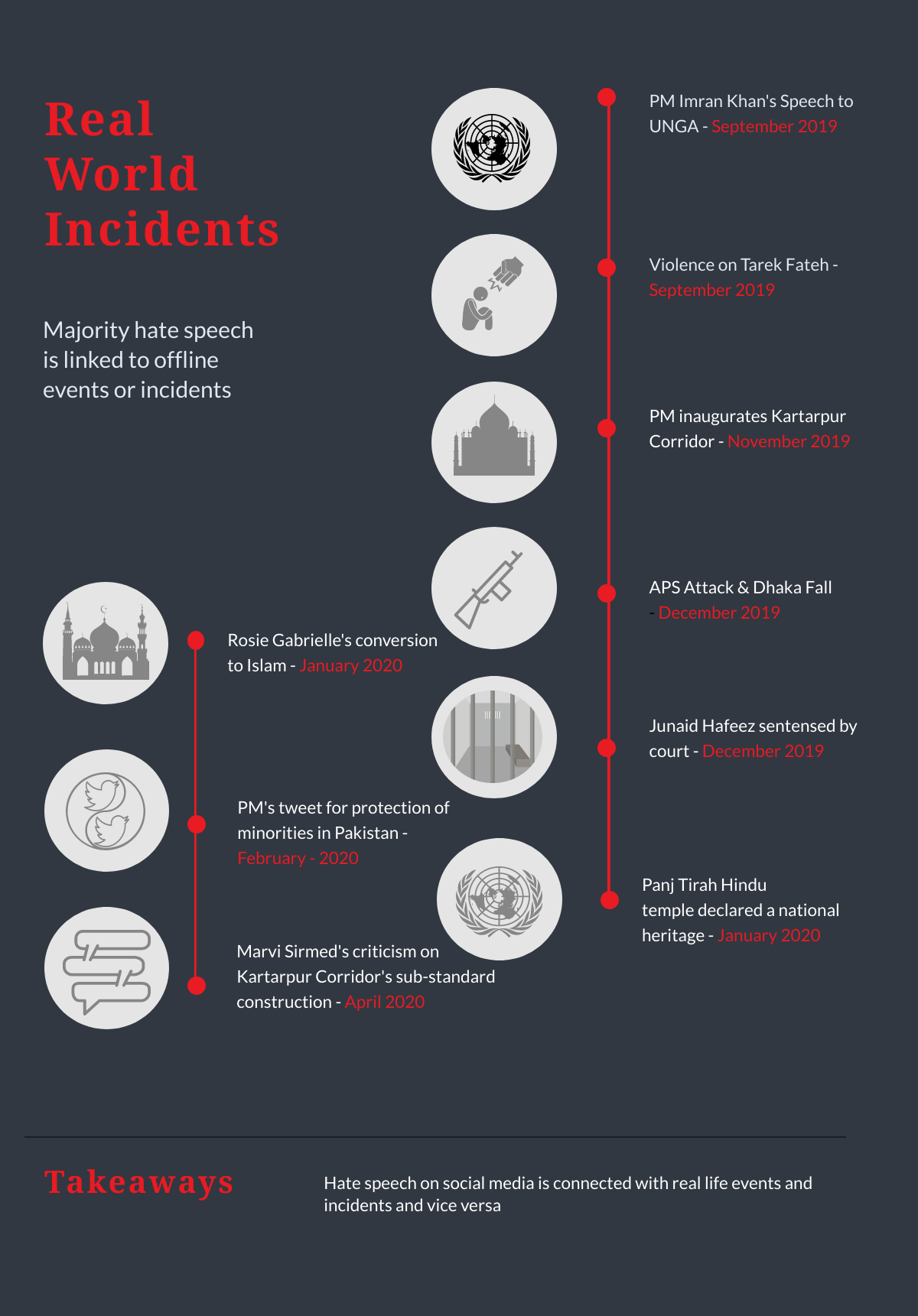 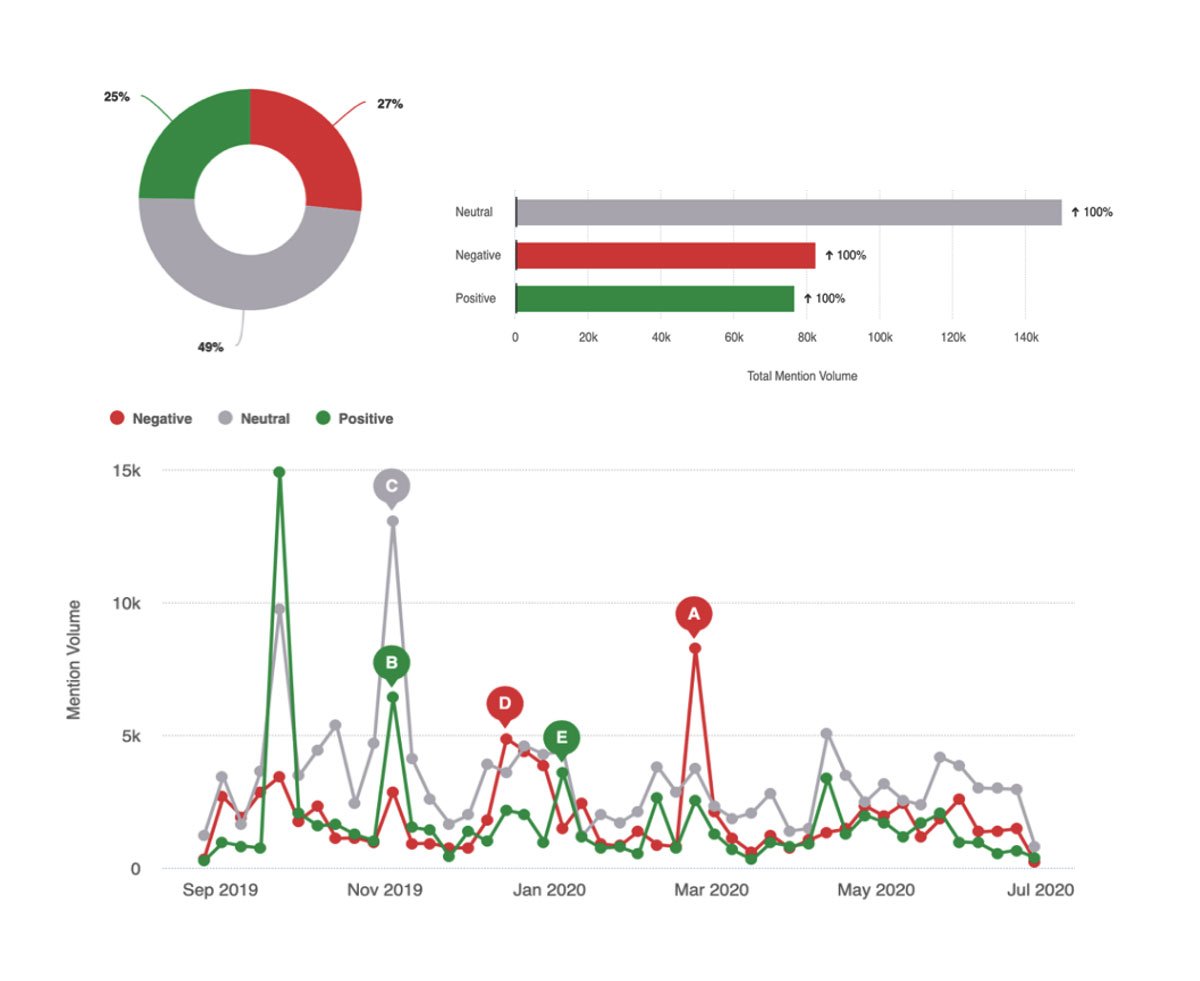 Although majority Twitter conversations around Hate Speech Monitor’s query set of keywords were in neutral; however, in comparison to positive speech, negative conversations overshadowed. 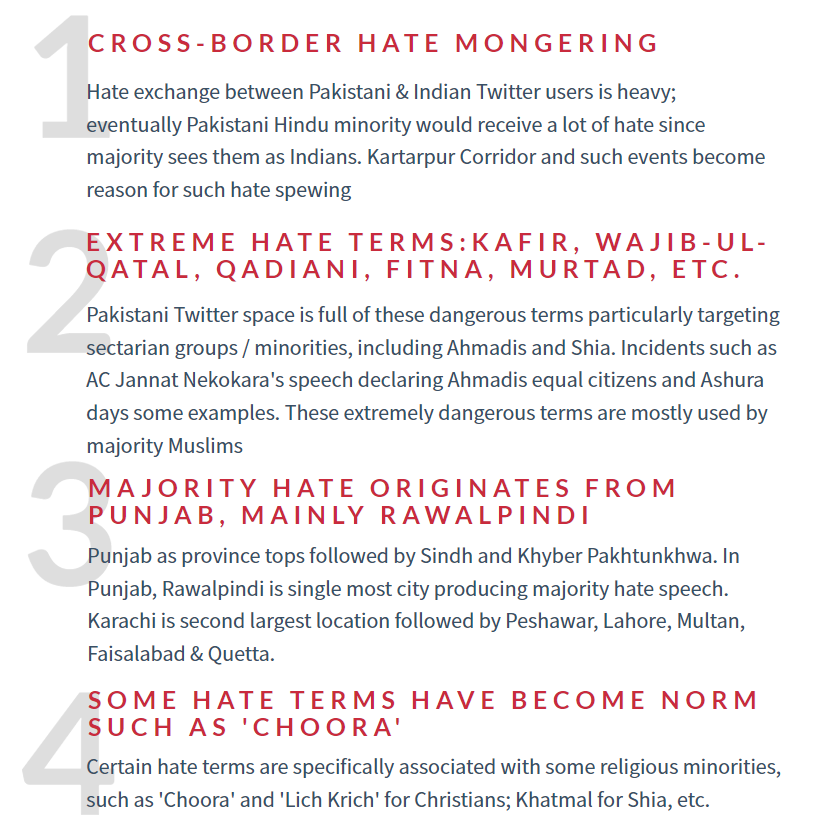 Mostly, the hate speech being monitored online originates from an offline incident and further fuels tensions, especially when this turns into violence.

.  Mostly, the hate speech being monitored online originates from an offline incident and further fuels tensions, especially when this turns into violence.

The government must implement a comprehensive legislative and administrative mechanism in accordance with the international human rights law to curb hate speech and hate crimes against minorities and ensure an effective redress mechanism for victims of these crimes, including assurance of strict action against the perpetrators and it should be ensured that these mechanisms have a balanced approach, so that legitimate speech is not restricted under the guise of hate speech;.

Keeping the June 19, 2014 judgement of the Supreme Court in view; the government must establish an Independent, autonomous, and permanent Commission for Minorities[1] (the one established by the Federal government is not a statutory body). It should be provided with adequate human and financial resources, with the powers of a tribunal, to examine complaints from minority communities’ members including incidents of incitement to hatred and hate crimes with timely redress, and with a system in place to collect data of incitement to hatred offences;

The government should work with civil society to counter hate speech, particularly building capacity of various stakeholders including media and administration;

Government must introduce and comprehensively implement a public policy and a regulatory framework which promote pluralism and diversity in the society at all levels;

The government should ensure the full implementation of June 19, 2014 judgement of the Supreme Court and Action (iv) of Thematic Area-II of the National Action Plan on Human Rights, assuring action against the perpetrators of hate speech against religious minorities;

The government should engage with Twitter and Facebook administrations in developing mechanisms for checking extreme forms of hate expressions being used to incite violence against groups and individuals belonging to minority sects and faiths and those of no faith;

The government should revise primary, secondary and higher secondary level curricula being taught at schools and madrassas with view of removing hate language and for inclusion of lessons that would promote acceptance of religious diversity, and social harmony among different faith groups;

Awareness raising campaigns on responsible use of Twitter and Facebook and other social media platforms are urgently needed. The government, civil society and social media platforms need to work closely together to evolve solutions to discourage hate-based stereotypes from society in order to mitigate the risks of dangerous hate crimes;

Alternate speech needs to be promoted in the society in order to promote respect towards thoughts and opinions of individuals and groups belonging to those of different/minority faiths. Online spaces are shrinking for these groups and an express effort is needed by range of actors to open them up for the minority groups; and

The government and other independent actors (donors, INGOs) should work with civil society to counter the menace of hate speech, building capacity of various stakeholders and knowledge sharing.